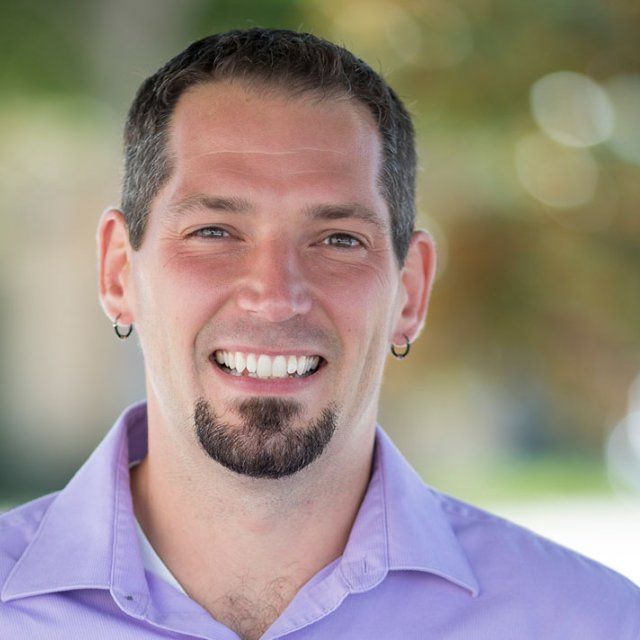 Dr. Kris Koudelka, assistant professor of biology, spends his days working in the realm of the invisible. Based on indirect detection, his research can’t be seen or summarized in a concrete sense, but rather consists of what Koudelka describes as “moving liquid around in small tubes” and analyzing it with the help of a variety of machines. But, it’s this aspect of his work — the inability to really visualize what’s taking place — that forces him and his students to grow the most, offering opportunities to think critically, problem solve, and look at the world in different ways.

Koudelka studies capsid viruses, or viruses with hard protein shells, through a revolutionary approach known as nanoscale engineering. This method focuses on repurposing the tough capsule-like exteriors of these viruses as transport modules for drugs and early detection imaging.

“Essentially, we’re taking these viruses, which people always see as bad things, and exploring good uses for them. We’re turning those paradigms on their heads and that’s really exciting,” said Koudelka.

Unlike current methods of drug delivery, which leave drugs untargeted and vulnerable to modification once in the body, drugs delivered via capsids are protected. This means they can be delivered to the specific area of need unmodified, in lower dosages, and without accidentally harming healthy cells along the way.

“A prime example of this is chemotherapies,” said Koudelka. “They are designed to kill quickly dividing cells and that’s why people experience side effects, such as hair loss. If we can target the drugs away from those healthy cells, not only can we more effectively treat cancer, we can also lessen those side effects and make it easier on the patient.”

In addition to medicine, capsids can also be filled with imaging molecules, which would aid in early detection of illness. This also has huge implications in cancer treatment. Though often detected through markers in the blood, cancer isn’t always visible by way of tumors, leaving doctors uncertain of where it will surface. Through nanoscale engineering, a modified virus targeted to the specific type of cancer could be injected, allowing doctors to pinpoint the cancer’s origin before a lump is physically detectable.

Due to the abstract and complex nature of his research, Koudelka often has to remind himself and his students to divide, conquer and simplify, examining one variable fully before moving on to the next. In a line of work that he describes as typically “feast or famine,” becoming overwhelmingly buried in or discouraged by his research are constant threats — a reality that forces him to take a step back from time to time and consider the benefits of his invested time, energy, and focus.

Though quick to characterize his research as unglamorous, Koudelka admits that the takeaways from it are pretty remarkable, often affording him and his students the rare opportunity to discover things, not just firsthand, but before anyone else. And the impact of his work goes well beyond the intellectual realm. It’s his daily explorations into the unseen, he says, that allow him to better understand the depths of God’s beauty and power.

“A single cell in my body is more complex than I will ever be or will ever even understand, and I have two to three trillion of them working in concert right now,” he said. “Just think, these things I can’t see are so intricate and intelligent, but they’re nothing compared to who God is. And the fact that He allows me to discover and learn about these things is exciting and invigorating and truly humbling.”