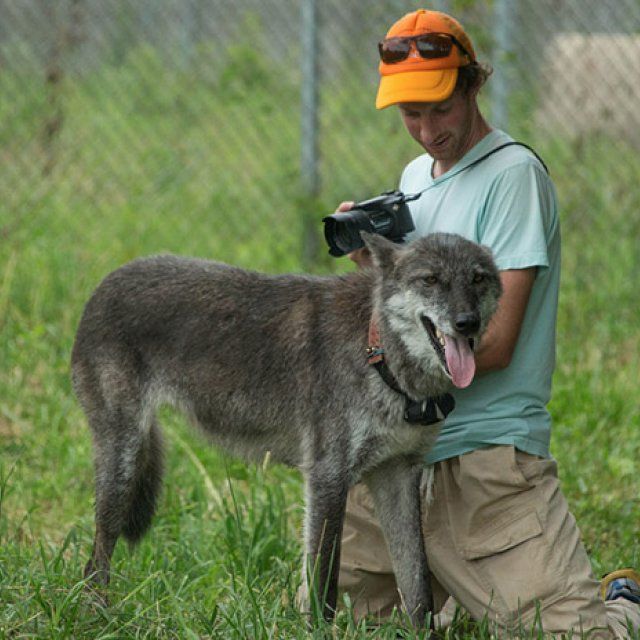 In graduate school, Caleb M. Bryce, Ph.D. trained dogs how to run on a treadmill. It was cute he says, but it was to study the effects of domestication and intensive artificial selection on the running performance of various breeds in comparison to their shared wild cousin, the wolf.

Caleb graduated from PLNU with a B.S. in environmental science in 2011 and earned a Ph.D. in ecology and evolutionary biology from the University of California, Santa Cruz (UCSC) in 2017.

His doctoral research focused on the comparative physiology of large carnivores and he studied how their physiology affects their behaviors, such as hunting. The research for his thesis required Caleb to gather data through field studies. The first segment of that research is where dogs on treadmills came in. Each dog was furnished with novel wildlife collar tracking technology which was calibrated as they ran on the treadmill. This research in the lab helped Caleb and his team before deploying it on animals in the wild so that they could interpret the collar data into meaningful behavioral and physiological information. From there, Caleb went out into the Santa Cruz mountains to study pumas and then ventured up to Alaska to study wild wolves. He even got recruited to work in the field with African lions in Kenya and Weddell seals in Antarctica.

Caleb started researching large carnivores as a summer research assistant in Costa Rica with PLNU biology professor, Dr. Mike Mooring. Caleb says Dr. Mooring was crucial in encouraging his focus in graduate school. “He was instrumental in the whole thing,” he says.

The role as a doctoral student, Caleb says, is the stepping stone from undergraduate studies to a research position and the chance to prove to the scientific community that one is capable of valuably addressing the most pressing scientific questions. As a doctoral student, Caleb developed several hypotheses to experimentally address fundamental questions in the field of ecophysiology, and he put together a committee that helped him along the way.

Getting a doctoral degree is not free, or inexpensive. Caleb was able to fund his research through a variety of means. He wrote a number of grants and received funding from the National Science Foundation. He also served as a teaching assistant at UCSC and for two years he was also a teaching fellow at a high school, where he taught biology and math courses, sharing his love of science with students.

Studying environmental science at PLNU, Caleb says, gave him a fantastic background in ecology and biological science. He studied all forms of life from single-celled amoeba to blue whales, and though his graduate work was specifically on large carnivores, having that broader knowledge helped him understand how all segments of biology affect one another. “I think if I had a narrow (biological) focus in undergrad, I wouldn’t have been as inclined to think as broadly about the research I do now,” he says.

During his time at PLNU, Caleb spent a semester in New Zealand in the Creation Care Study Program, a Christian environmental studies program that looks at living a sustainable lifestyle in connection to faith and ecology.

Along with his academic responsibilities, Caleb was a guide with the Great Escape program on campus, so while he spent many hours inside a science lab, he balanced that with time on outdoor excursions. He also served as the co-president of the Students For Environmental Awareness and Action Club as well as the PLNU biology and chemistry societies.

There are two main avenues for scientists with Caleb’s background: academic research and professional work in the environmental science sector. He feels his dream job involves being part of both worlds. He would like to be part of a dynamic team solving issues in sustainability while getting to travel and take part in exciting applied research. He’s currently working in a consulting role for a startup company doing renewable energy financing, and in June he and his wife Carli (Environmental Science, Class of 2012) will become the research and operations directors at a large carnivore conservation NGO in Botswana.