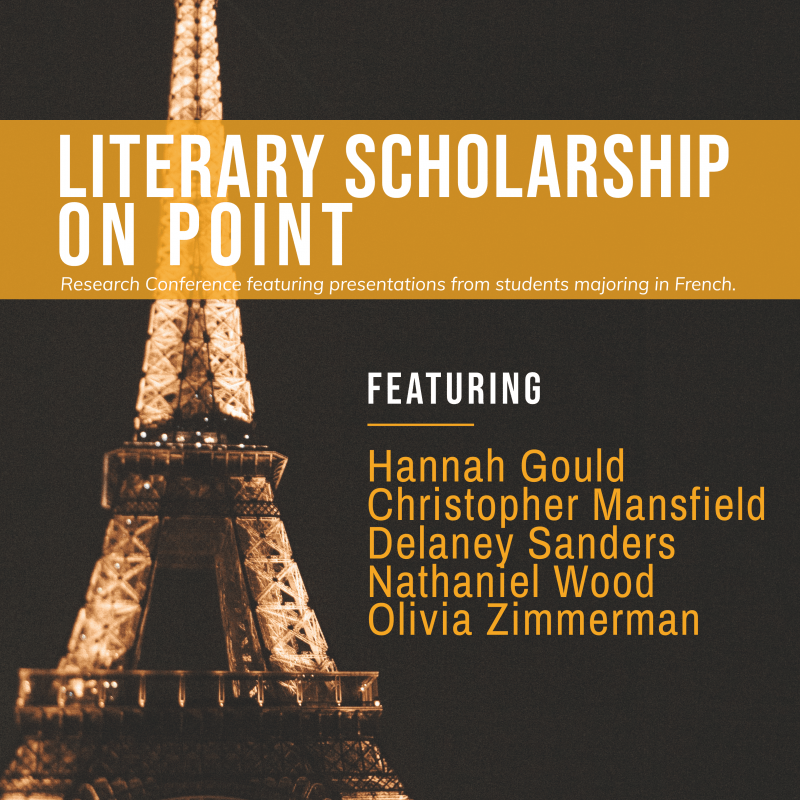 Students from Point Loma Nazarene University will present their research at French Literary Scholarship on Point, a series featuring student research from the Department of Literature, Journalism, Writing, and Languages.

Hannah Gould, "The Evolution of Falconry in the Literature and Culture of France from the Middle-Age to the XVIIth century. Study of four texts"

ABSTRACT: During the Middle Ages, the sport of falconry appeared in France where it became a popular activity among individuals of nobility. Due to this association, depictions of hunting with birds of prey began to develop within the literature of the time, such as within poetry. In the Renaissance, falconry continued to hold interest for royalty, though its popularity declined in the early modern era. Throughout these time periods, falconry related works demonstrated a transformation of the culture of France as a whole.

ABSTRACT: For Woman, what characteristics might Simone de Beauvoir accept in a romantic relationship between a woman and a man? If such relationships allow her to maintain her economic freedom, personal identity and equal value as a human being, might that be acceptable, even preferable to Beauvoir?

ABSTRACT: Analysis of "Carmen," "La Venus d'Ille," and "Une Femme est un diable" by Prosper Mérimée, a well-known 19th century male writer. The purpose of this research is to investigate, from the point of view of a feminist critic, the way in which Mérimée represents women in his works. Feminist criticism is relevant to Mérimée's writing because it studies 19th century literature from a new and interesting perspective.

ABSTRACT: Philosophy and France are like the numbers on a clock. One is necessary for the discussion of the other. We will be discussing the main French Philosophers of the seventeenth century. Specifically through the lens of René Descartes, Blaise Pascal, and Nicolas de Malebranche, and their critiques from other philosophers. Through understanding how each philosopher mentioned is connected, we will analyze the specific ontological arguments of each philosopher, as well as the modern-day effects of each philosopher and their arguments.

Olivia Zimmerman, "Claude Debussy central figure of "La Belle Epoque" and his impact of the evolution of music"

ABSTRACT: Have you ever wondered how music evolved from classical piano to the many genres of today? My presentation explores the artistic movements in the golden-age of France, La Belle Époque, specifically on music and how it impacted and influenced the music of today. I am putting the most emphasis on Claude Debussy, the composing genius of this era because he was the first person to challenge the traditional practices of music. I will also explore Debussy’s friendship with his colleague Stéphane Mallarmé, the poet whose masterpiece “L’Après-midi d’un faune” Debussy put to music by using his own unconventional techniques that are now the foundation of modern jazz.