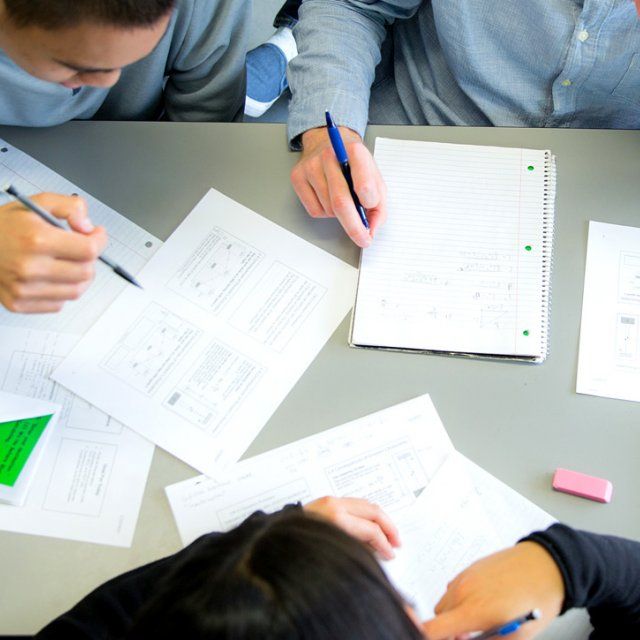 Students who pursue a major in the physics and engineering department have a unique opportunity to conduct research alongside experienced faculty. This student research involves the methodical formation of a scholarly honors project, the process and goal of which is to prepare students for the world of post-baccalaureate scholarship and research.

Some of PLNU’s physics and engineering majors engage in summer research with faculty at PLNU. Other students participate in Research Experiences for Undergraduates (REUs), which are generally held at major research universities and funded by agencies such as the National Science Foundation.

All research involves working closely with a faculty mentor on a research project, and the research generally culminates in a presentation of your findings. Many physics and engineering students turn their summer research projects into honors theses. In completing the thesis, you will be coached through the various stages of conducting a research project and transforming your work into a scholarly presentation and paper.

The Department of Physics & Engineering will strongly support you as a research student, and you can look forward to working with your faculty mentor throughout the research, editing, and presentation processes, all while gaining invaluable advice and guidance every step of the way.

Effects of Time-Dependent Heat Sources On Neutron Star Crust Cooling
Austin Smith
Mentor: Dr. Heide Doss
Neutron star crust cooling can give insights to the interior composition of the stars. Using dStar and the neutron star cooling simulation code NSCool, a variable mass is accreted onto different neutron star models. Previous accretion simulations have commonly assumed a constant mass accretion over a long epoch; this research investigates the effects of different accreting mass accretion rate distributions and focuses on a periodic Gaussian distribution, with a finer time epoch. The simulations produce plots of mass accretion rate distributions as well as effective temperature and luminosity as viewed by a distant observer over time. The effects on the quiescent cooling curves due to the time-dependent distribution shapes of accreted mass are found to have only short time-scale effects, with differences only noticeable on timescales as on the order of the accretion events.

A Study in Securing the Internet of Things
Joey Tuttobene
Mentor: Dr. Mike Leih
Current Internet of Things (IoT) cybersecurity threats were investigated using current literature and direct examination of IoT devices including the 3D printer control software OctoPrint, the autonomous vehicle middleware MOOS-IvP, and a common consumer smart lightbulb. This research found that most IoT devices transmit in plaintext and that software controls alone are insufficient in control systems applications. Recommended best practices for organizations include segregating IoT devices on a network, using non-default credentials, and keeping devices up to date. Manufacturers need to include robust encryption and authentication of messages with their offerings, as well as provide methods to update devices easily and safely. Finally, physical fail-safes can complement imperfect software in IoT control system applications.

Can we use Transfer Learning to Implement a Convolutional Neural Network to do Large Mammal Classification on an Edge Device?
Noah Cole
Mentor: Dr. Ryan Botts
Conservation efforts of large mammal species in Costa Rica rely on extensive camera tracking networks to record these species’ presence, activity, and interactions. By using transfer learning on an edge device to retrain a Convolutional Neural Network the process of tracking and identifying these mammals will be streamlined. Transfer learning on edge devices was found to be effective in retraining and deploying CNN image classifiers.

Characterizing a distributed pressure sensor built from off-the-shelf piezoresistive polymer
TJ Wiegman
Mentor: Dr. Tom Carter
Measuring the distribution of mechanical pressure across a surface is useful in a wide variety of applications, but traditional measurement tools are either very expensive or single-use. Here we characterize a exible, reusable sensor built from off-the-shelf materials that is simple and low-cost, but unsuited for high-precision work.

NOTE:
Although the initial research was suggestive of nuclear tracks, it was not definitive. Further experimentation on CR-39 showed that while the detector is good for detection of energetic particles due to nuclear processes in air, the tracks formed in an electrochemical cells are not distinguishable from tracks formed by non-nuclear processes as shown in the following APS 2020 March Meeting Poster Session: Investigation of Track Formation in CR-39 for Various Hydrated Environments
How much do college students rest in an age of technology?
Savannah Bolock, Abigail Christensen, and Patrick Harvey
Mentor: Lori Carter
Statistics show that some technology, particularly phones, has been affecting students negatively and manifesting in ways such as sleep deprivation and higher stress levels. This study was conducted to shed light on how much rest college students are getting in an age of technological innovation based on this observation and our research. We hope that implications of this will include people, particularly college students, to become more aware of how they are spending their time and ultimately how to find rest despite how busy they may find themselves.
Graphene Research
Noah Cole, Harry Han, Isaac Hughes, Lindsey Plavcan
Mentor: Michelle Chen
Research Performed at PLNU
3D Modeling and Lab Design
Noah Cole, Isaac Hughes
Mentor: Michelle Chen
Research Performed at PLNU
Supercapacitor Research
Lindsey Plavcan
Mentor: Michelle Chen
Research Performed at PLNU

Engineering/Physics Galactic Cosmic Radiation Shielding Using Active and Passive Methods
Matthew Sailer
Mentor: Heide Doss
We consider the threat of radiation during space missions and review the different shielding methods proposed over the past 60 years. We propose a new method for shielding with the ability to harness useable electrical power and create thrust from the environment.

Chemistry/Physics Synthesis and Computational Analysis of Novel IspF Inhibitors
Daniel Harper
Mentor: Lane Votapka
The development of new antibiotics is time-intensive and costly. In this study, computer methods were combined with traditional experimental work to yield a more focused approach. When the experimentally synthesized molecules failed to yield the desired results, the computational results provided an explanation and a promising angle for future research.

Physics Exploratory Coordination Chemistry: Metal-Nitride Nanoclusters with Cobalt, Bismuth, and Titanium Species
Brendan Crabb
Mentor: Laurance Beauvais
In recent years, the study of nanoclusters has grown considerably because of their possible use in a wide range of applications. In this research, we are focused on preparing new titanium chloride precursors to titanium-nitride clusters. These molecules will be presented and possible synthetic routes to new nanoparticles will be discussed.

Constructing of and Initial Observations With a Sonoluminescence Chamber
Drew Eby, Alyssa Forber, and Laura Skinner
Research Performed at PLNU