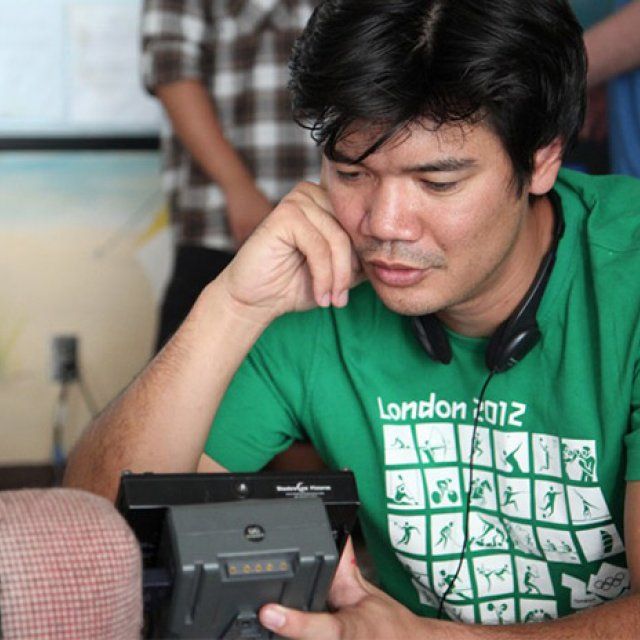 Storytelling and introspection is at the heart of everything that Destin Daniel Cretton (01) does. Whether it’s detailing the inner workings of a short-term foster-care facility, deep diving the San Diego indie music scene, or profiling the real-life coming-of-age saga about a 14-year-old living alternating lives as an emerging adolescent and a vassal in a medieval fantasy kingdom, the 35-year- old can see a story in just about anything.

And he has used his gift of storytelling to produce a cadre of short and feature films that have critics raving about his talent.

Cretton’s crowning achievement to date is a feature film called Short Term 12, which he wrote and directed, and which won the Audience Award and the Grand Jury Award at the 2013 South By Southwest (SXSW) Film Festival. But even as the accolades come pouring in, Cretton can only sit back and trust emotional intuition about telling stories that connect with people. “It’s very unhealthy for me to buy into the whole ups and downs of winning awards,” he said from his home in Los Angeles. “I try not to trust the hype very much. It’s great to have attention to the movie because there are so many people who worked hard on the project. But the most gratifying thing for me is when I sit in the back of the room and watch people laugh and cry and project themselves to the characters and the story in a very real way.”

Short Term 12, the feature, was expanded from a 22-minute short film of the same name, which Cretton made in 2008, and which won the Jury Prize in Short Filmmaking at the 2009 Sundance Film Festival. It comes from his real life experience working in a foster-care facility for at-risk teens in San Diego.

After graduating from PLNU in 2001, Cretton was looking for work and got a job at a halfway house thanks to a friend who also worked there. The film takes viewers on an emotional journey and shows in stark, brutal reality the fragility not just on the psyches of the kids at the home, but also the adults who work diligently to try and provide a safe place of organized structure in the constant chaos of their lives.

Cretton recalls the myriad realities that opened his eyes in working with troubled youth and “the residue that parents can leave on their kids.” He said the experience changed his perspective and made him ask more questions, not just about the people living in the reality of the foster-care system, but also about the world in general.

“The biggest thing I learned while I was working there is that there isn’t a huge difference, at least in my experience, between … the people in charge and the people who are supposed to be being cared for. And initially I felt like I had to somehow prove myself as being the leader and being the one who has everything together, and I found that the best leaders there are the ones who … do not feel that they are on a higher plane than the kids. They are able to be open and honest and equally as vulnerable with them when it is appropriate to do so,” he said in an August 2013 interview with The Washington Post.

Cretton’s career filmmaking accolades can be seen as a bit surprising given that he admittedly “never thought he was going to go to college.”

He came to PLNU on a whim after spending two years at a community college on Maui. He found out about the school because a lot of his friends were going there, but said he quickly fell in love with the place.

He became interested in filmmaking as a mass communications major, but never fully pursued it, as at that time the school did not have the resources available to make it a full- blown concentration. But Cretton does credit PLNU with something that isn’t quantifiable or even as tangible as a diploma.

“PLNU opened my mind to possibilities, not just professionally, but with relationships and with life in general and finding my place in the world. Filmmaking wasn’t something that I discovered until the end of my time there,” he said.

During his senior year, he spent a semester abroad at the L.A. Film Studies Center. It was there that Cretton said he became inspired to tell stories in that medium.

After working at the foster-care facility, he went to film school at San Diego State University, where he began the process
of making short films. He made his first film, Longbranch, in 2002, followed by Bartholomew’s Song and Drakmar: A Vassal’s Journey in 2006, and Deacon’s Mondays in 2007—all were made with the help of fellow PLNU alum Lowell Frank (01).

While his early films were successful, Cretton’s big break in the industry didn’t come until he was awarded an Academy (yes, that Academy) Nicholl Fellowship for Screenwriting in 2010 for the Short Term 12 script. The fellowship award of $30,000 required that Cretton produce at least one original screenplay in a calendar year, which he did with 2012’s I Am Not a Hipster.

Shot primarily in San Diego, I Am Not a Hipster allowed Cretton to reconnect with several PLNU alumni, who helped him work on the project. It details the indie music and arts scene in San Diego and, according to the film’s website, “explores what it means to be creative in the face of tragedy.”

Cretton submitted the film to the Sundance Film Festival, where it was accepted, giving him his first feature film at the trendsetting festival. “The fellowship was a real boost of confidence for me,” he said. From there, Cretton’s career took off. He was finally able to get funding to make Short Term 12 into a feature, something he had patiently (and frustratingly) waited years to be able to do. To this date, he is the only Nicholl Fellowship award winner to have both his submission script and his fellowship year script made into feature films.

“Things happened really quickly from there,” said Cretton. “I sent the [Short Term12] script to Brie and John about a month before shooting, and they were really excited about it.”

He called the casting process for the kids’ roles in Short Term 12 “terrifying and stressful.” After about two weeks of seeing dozens of actors, Cretton said he couldn’t find a single actor who could capture the necessary authenticity of the roles—until he met Kaitlyn Dever (ABC’s Last Man Standing, FX’s Justified).

“We had one perfect person come in and her audition literally made me forget the words I had written,” he said.

While Cretton draws on inspiration for stories from a variety of sources, he admits that he most frequently draws from his own introspection.

“Inspiration definitely changes,” he said. “I draw from my own experiences, yes, but a lot of it is thoughts, ideas, questions I’m struggling with or am constantly asking myself.”

And while having a film at Sundance and winning various industry awards is a lifetime of accomplishment for anyone in the movie-making business, it’s only the beginning for Cretton.

It was reported in October that he is in negotiations with Lionsgate Entertainment to direct and help write the adaptation to The Glass Castle, the 2005 New York Times bestselling memoir by Jeanette Walls. Bigger still, the movie is being produced by Oscar- winner Jennifer Lawrence, who has signed on to play the starring role in the adaptation.

“When I read the novel, I couldn’t put it down. I felt very connected to it in a very personal way,” Cretton said. “I feel very honored to be able to have a shot to adapt it for the screen.”

He said he’s working hard on the rewrite every day, along with screenwriter Andrew Lanham, and said that while there are no timetables in place, it’s hoped the screenplay will be completed in 2014.

And while his star is certainly on a meteoric rise, Cretton admits that he still has the utmost fondness for his time at PLNU.

“I remember living in Young Hall and having someone say, ‘we’re not going to live in a better place for the rest of our lives,’” recalled Cretton. “I’m pretty sure they were right.”