Biology-Chemistry and Philosophy-Theology, Class of 2004 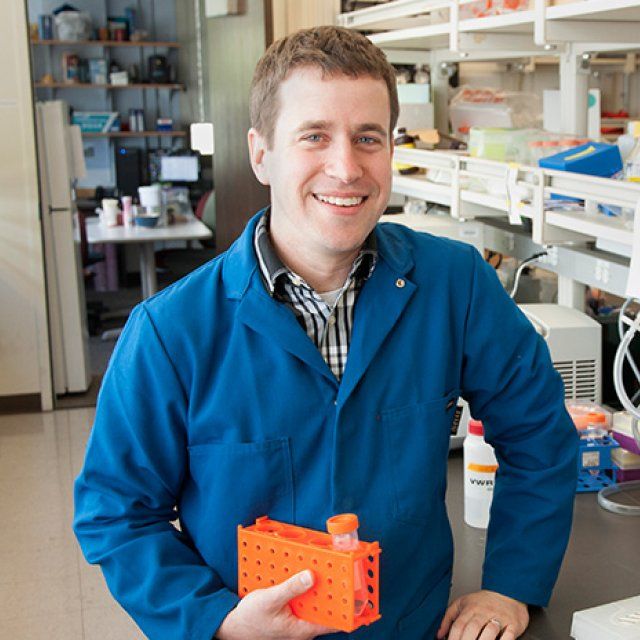 Neurons are cells found in the brain and nervous system that transfer nerve impulses, and Professor Evan Miller, Ph.D. makes them change colors and glow. His team of researchers are doing this to make maps of brain activity and figure out how neurons communicate.

Evan graduated from PLNU in 2004 with two dual degrees in biology-chemistry and philosophy-theology. He then completed his Ph.D. in chemistry in 2009 from University of California, Berkeley.

As an assistant professor in the chemistry and molecular and cellular biology departments at UC Berkeley, Evan is on the tenure track and does a combination of research and teaching. He runs a research lab, managing around a dozen scientists: graduate students and postdoctoral researchers. He describes it as being similar to running a small business.

His time at PLNU sparked his research interest in chemistry and neurobiology. At PLNU Evan studied organic chemistry, which involves the act of putting together molecules. To understand how molecules behave in differing biological and living systems, Evan now designs the colored and fluorescent molecules, so there are visual cues to the molecules’ behavior. For instance, the molecules may glow or change color in response to a process occurring inside living cells.

Evan is specifically interested in using fluorescent molecule to decipher when and how brain cells communicate with one another. The fluorescent chemicals Evan and his group makes change their brightness based on the voltage or electrical properties of neurons.

Right now, there are many tools that are good for looking at the structure of the brain, but Evan says there are few tools that allow us to learn about the activity within the brain. His research provides a dynamic way to look at the brain and neuroscience.

As a biology-chemistry major at PLNU, Evan took coursework highlighting both fields of study. There was a lot of time spent in lab and though that included many Friday evenings, he says, looking back, it was awesome being with a small group of students with a professor running real experiments. “It was almost like an internship with each class,” he says. Now, Evan teaches a biochemistry class at UC Berkeley that is inspired by the biochemistry course he took at PLNU with biology professor, Dr. Michael McConnell.

Evan also had plenty of opportunity to conduct research while at PLNU. He completed an honors project and did summer research with PLNU chemistry professor Dr. Victor Heasley. He says this research was invaluable preparation for grad school because it was like conducting a miniature Ph.D. project. Now, his research knowledge is informing the greater scientific community.