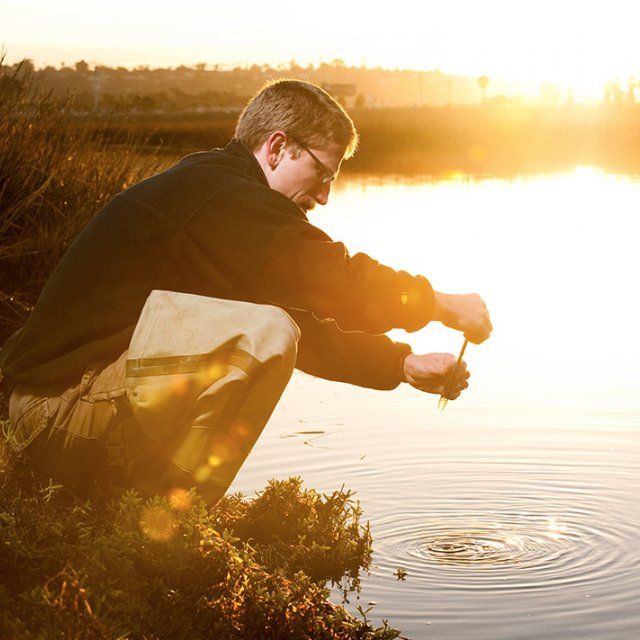 Dr. David Cummings, PLNU professor of biology, has been making quite a bit of news for his research and discovery of antibiotic-resistance bacterial DNA in Southern California wetlands. In addition to academic journals, his work has also recently been featured in the San Diego Union-Tribune and The Huffington Post. We asked him a few questions of our own.

Q: What exactly are antibiotic-resistance genes?

A: Genes are segments of DNA that give information to a cell to tell it how to do something, like a paragraph in an instruction manual. Antibiotic-resistance genes tell the bacteria how to make a protein that protects it from the killing action of an antibiotic drug.

Q: How did your work with the study of drug-resistance genes come about?

A: We were studying the good bacteria that live in our local urban wetlands, asking the question, “Are the bacteria in these urban-impacted wetlands different than those in the pristine wetlands?” All the while, I was asking my students and myself, “What are the really important questions here that no one is looking at?” It occurred to me that, while many professionals were studying the pathogens at these sites, the bad bacteria, no one was asking questions about the drug resistance of the DNA that makes the bacteria resistant. We ran a few pilot experiments to see if there was anything to it, and to our surprise, we found a very important resistance gene. The deeper we probed the more we found. Now we can find just about any resistance gene we look for, at least in the Tijuana Estuary, where there is direct sewage pollution. Famosa Slough here in Point Loma is much less contaminated.

Q: Why should the everyday person care about antibiotic resistance genes?

A: Resistance genes are the cause of the superbugs we hear about in the news, bacteria like MRSA (Methicillin-resistant staph aureus) or multidrug resistant tuberculosis. These genes are typically found on larger pieces of DNA called plasmids, which bacteria can share with one another. So, if one species has a plasmid with one (or often several) antibiotic-resistance genes, and it comes into contact with another species that does not, it can make a copy of the plasmid and share it, making the second species drug-resistant as well. This is the primary way that the pathogens that cause disease in humans become resistant to the drugs we use to fight them.

Q: What do students get excited about when they help you with this kind of research?

A: They love the applicability of it. It’s not basic science that has no clear connection to human problems. Public health is very likely at risk because of this problem, and yet this problem is not on anyone’s radar (not yet). It’s also very exciting for them to be the first to witness something, like a new species of bacteria or a new plasmid. It’s a privilege as a scientist to be the first in human history to observe something in creation.

Q: Has there been one sort of a-ha moment in your research that stands out?

A: Certainly the early pilot studies were a-ha moments, when we first found resistance genes in the wetlands. Pouring through vast amounts of DNA sequences sometimes provides a-ha moments as well. For example, sometimes we find new genes that explain what we’ve been seeing in the bacteria.

Q: Last year, one of your students found CTX-M in the Tijuana River Estuary. Did that spark any specific progress?

A: CTX-M is a very important resistance gene. In fact, it makes bacteria resistant to just about all of the betalactam antibiotics, which includes all the penicillins, the cephalosporins, and the carbapenems, together comprising the majority of the antibiotics we use today. Unfortunately, we are short on funds right now and haven’t been able to pursue this question further. Hopefully, we can re-focus on it again in the near future.

Q: What are your plans for this study over the summer?

A: Right now, we are screening through a couple hundred plasmids isolated over the past year by Doug Zuill (a recent graduate from the biology department). We’re looking for novel multidrug-resistance plasmids that can be readily shared across species.