Dean of the College of Health Sciences 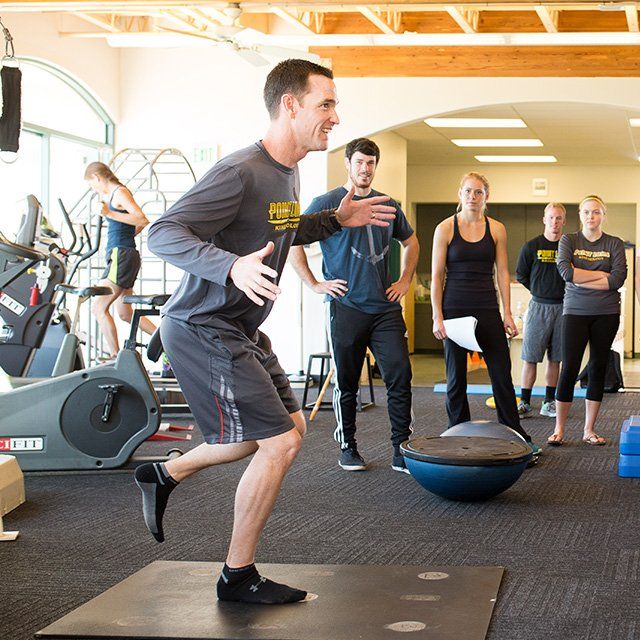 When students ask PLNU professor and Dean of the College of Health Sciences Dr. Jeff Sullivan for career advice, he tells them to find what they’re passionate about and distinctly gifted in and use that to partner with God in what He’s doing. For Sullivan, this is more than advice; these are the words he lives by.

“I feel incredibly and uniquely called to be a teacher,” he said. “It wakes me up in the morning.”

As blessed as he feels to teach, his career path wasn’t always headed in that direction. Ever intrigued by the workings of the body, Sullivan had his sights set on physical therapy. It wasn’t until being encouraged by his own PLNU professor and mentor, Dr. Leon Kugler, that he began to seriously consider teaching. With a new curiosity about the education field, Sullivan graduated from PLNU with a bachelor’s in kinesiology and went on to receive his master’s from San Jose State University and his doctorate from Oregon State.

While in graduate school, Sullivan became increasingly interested in orthopedics, with one area of study especially capturing his attention. With so much already known about the knee and ankle joints, Sullivan decided to go a different route, instead focusing on the shoulder and cervical spine. These lesser-known areas are complex and have presented quite a challenge for the orthopedic community in terms of assessment. For Sullivan, it was this challenge that inspired him to learn more.

In addition to concentrating on his studies, Sullivan was given the opportunity to put his knowledge into action, serving as an athletic trainer for various sports teams at Stanford University and teaching in the athletic training program at Oregon State. These experiences strengthened his interest in working with athletes and solidified his call to teach. After graduating, he was offered a position at PLNU that satisfied his desires to do both.

“PLNU has allowed me to blend clinical service with teaching,” said Sullivan. “I enjoy being an athletic trainer here—traveling with the teams and helping prevent and rehabilitate injuries for our athletes—but teaching is where I feel called because I get to influence students to help others with the healing process.”

Sullivan’s passion for teaching is driven by his captivation with the human body. For him, this stems from more than his love of science or sport, but from an admiration for the body’s intricate design and, even more so, for its Creator.

“My work and my faith are inextricably bound,” he said. “God is tremendously creative, and I think His ultimate creation is men and women. The beauty and complexity of the human body is amazing and is something we are never going to be able to fully understand. That’s fascinating to me.”

Sharing this fascination with his students keeps Sullivan motivated in the classroom. While the focus of his teaching is to make sure students gain a clear understanding of how the body works, his hope is that they leave with more
than knowledge.

“I train my students to be experts at understanding common causes of diseases, dysfunction, and injury, and then fixing them. I want them to be detectives of the human body and understand how to use the evaluation process to arrive at a diagnosis for an injury. But, I also want them to explore and appreciate the beauty and intricacy of the human body and look at their patients with that in mind,” he said.

His dedication to his students and his field has resulted in new opportunities for Sullivan over his 11 years at PLNU. In addition to his roles as clinician and teacher, he has taken over as director of the athletic training education program (ATEP) and, most recently, as head of the kinesiology department.

As a professor, Sullivan largely sticks with his areas of expertise: orthopedics and athletic training. But as chair, Sullivan is constantly assessing potential areas of growth for his department. Lately, one emerging trend has caught his eye.

“The healthcare and fitness industries are beginning to collaborate more effectively,” he said. “Physicians are starting to reach out more to fitness professionals to help promote health and prevent conditions such as diabetes and heart disease. As a result, the fitness industry is seeing steady growth. The two groups are realizing a need for one another, and that presents a really exciting opportunity for us.”

“Students are becoming more interested in the healthcare professions,” said Sullivan. “Some of that has to do with national trends and job prospects, but I would like to think students are also fascinated with helping other people heal. They want to blend their love of science and the human body with their desire to serve others and see kinesiology as a perfect way to do that.”