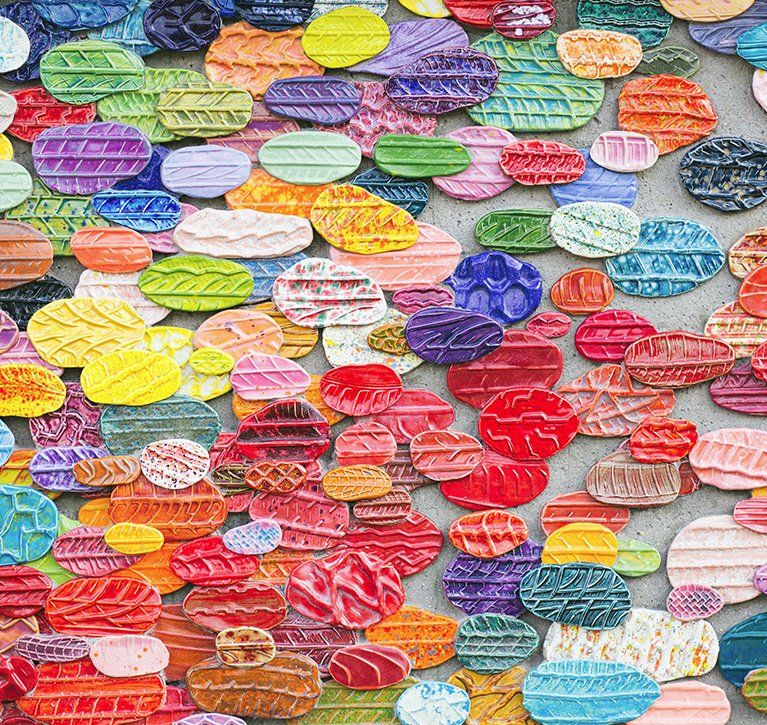 In 2015, David Adey, PLNU art professor, got a surprise invitation from the County of San Diego to create a new landmark public art piece.

As part of the final phase of construction for the county’s Waterfront Park project, a new parking structure for employees at the nearby County Administration and the public was set to break ground in 2015. Without his knowledge, Adey was unanimously selected to create an art piece to adorn the concrete structure. Adey said, “I guess you could say it sort of fell into my lap!” With commission in hand, Adey was tasked to come up with a vision for what would become his first-ever piece of public art.

In March 2015, the work began with a celebratory kick off. Adey was joined by student volunteers from PLNU, members of the County Board of Supervisors, and PLNU’s President Bob Brower, to begin collecting individual tire treads to create the piece. “We collected about 800 tiles that first day, but would end up needing around 3,500, so we had a long way to go,” recalled Adey.

Each individual impression collected was fired, glazed, and fired again for the very labor-intensive piece. The County News Center followed Adey and his students throughout the process as more tiles were created, arranged, and finally glued together over the summer at Adey’s studio on campus. After a tense transport, the wall-mounted sculpture, titled “Inspiration Expiration,” went up on the building days before the October 30 dedication.

When asked about the meaning behind the piece, Adey explained, “The tire tread references the individual. There’s a diversity element to the piece, since each is a unique color and literally no two are alike, but there’s also this idea of the commute, that all of us get into our cars and go to this place of work and then go home and then get up and do it all over again. The daily commute is something that unites us but also shows our individuality.”

In October 2016, the permanent public sculpture commission for the County of San Diego was installed at the pedestrian entrance to the parking structure at Cedar and Kettner streets in downtown San Diego.

For more information on Adey’s project, check out the full documentary at the County News Center.