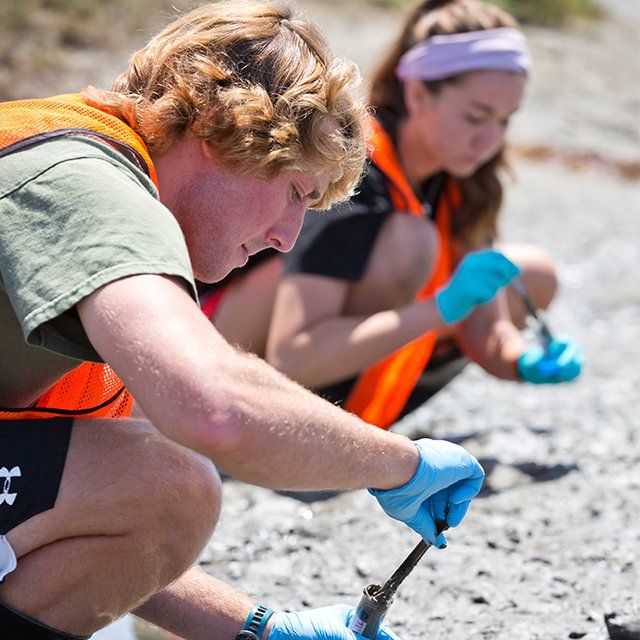 Within our department we have both Post-grad and Undergrad Research opportunities to take advantage of.

Dianne Anderson, Ph.D.
The Anderson group conducts research on how students learn challenging biology concepts. The products of this research are used by teachers, researchers, and professors in classrooms across the country.  A diagnostic test called the Conceptual Inventory of Natural Selection (CINS) is useful for pre and post-assessments of students from middle school through college.  A series of concept cartoons has also been developed to assist middle school and high school science teachers in teaching various topics.  The cartoons provide teachers with a tool to probe the ideas held by students so that they can adjust instruction to help to move students to scientific understanding. Currently, the collection includes many cartoons on natural selection, as well as others addressing osmosis/diffusion, mitosis/meiosis, energy & matter, and metabolism.  Future research will aim to expand the topics addressed in the cartoons, as well as to translate some of the existing cartoons into Spanish.

PLNU biology students have the opportunity for hands-on research experiences in a variety of settings. Our students have participated in research locally at government agencies, biotech firms, and universities, while others have journeyed outside San Diego to study bison in Nebraska, mammals in the Costa Rican cloud forest, deep-sea communities in the Kermadec Trench near New Zealand, and more. One new project may include drone surveys and tagging sharks. You will take on an active role in projects, using sophisticated instrumentation and computational resources to gain practical skills and experience as you share in the failures and triumphs of original research.

Walter Cho, Ph.D.
The Cho research group focuses on the study of the biodiversity, biogeography, and population connectivity of marine fauna. We are particularly interested in the invertebrate associates of deep-sea corals and the ecology of deep-sea habitats including seamounts and trenches. We use a variety of molecular and ecological tools to study the ecology of these communities from all around the world including the North Atlantic seamounts, Tasmanian seamounts, the Gulf of Mexico, the Kermadec Trench, and Hannibal Bank off of Panama. Research

Yoojin Choi, Ph.D.
At her previous institution, Choi supervised students’ efforts to determine the function of a putative gene in Chlamydomonas reinhardtii, a mixotrophic unicellular alga whose flagella are often used as a model system to study primary cilia in mammals. The putative gene (SSD1) has a high degree of similarity to the sterol-sensing domain of the mammalian gene Patched (PTCH1). Choi hypothesizes that the SSD1 gene product may allow the algae to sense certain sterols in their environment, perhaps important for their heterotrophic survival. RNA interference (RNAi) can be used to silence the gene and thus reveal its function.

Dave Cummings, Ph.D. and Dawne M. Page, Ph.D.
We want to understand how bacteria resist the actions of antibiotics and how these resistance mechanisms are able to spread to bacteria that were previously susceptible. We are especially focused on genetic elements called plasmids: small, circular, mini-chromosomes that can often be shared among bacteria. Resistance plasmids are captured from bacteria in nature, fully sequenced using NextGen sequencing technologies, and annotated, mapping the various genes they encode. The behavior of the plasmids, such as transferability to different species and expression of antibiotic resistance, is then studied in the laboratory. Our research suggests that resistance plasmids are common in nature, where they can acquire new genetic features before emerging in clinically relevant bacteria. Research

Mike Dorrell, Ph.D. and Heidi Woelbern, Ph.D.
Our research focuses largely on studying cancer mechanisms and identifying novel cancer therapies that are more effective and overcome the side effects associated with current treatments.  We focus largely on mechanisms by which chemotherapies can be targeted directly to the tumor in collaboration with Dr. Rouffet (Chemistry).  We also study how cancer cells signal macrophages to prevent immune clearance and polarize our immune cells to promote tumor growth rather than clearance.  Another study works in collaboration with Dr. Jansma (Chemistry) to study the mechanism by which the human papilloma virus causes excess cell division. Finally, we also work closely with the Lowy Medical Research Institute to study degenerative eye diseases. Research

Kristopher J. Koudelka, Ph.D.
The Koudelka research group centers on the chemical modification of plant and bacteria viruses for use as drug delivery and imaging vehicles. His students specifically engineer viral nanoparticles (VNPs) to efficiently and specifically transport drugs to sites of disease. These disease specific VNP formulations can also be modified with dyes or contrast agents to aid in earlier detection of diseases such as a cancer. Research

Michael McConnell, Ph.D.
The McConnell research group studies the bacterium known as Salmonella anatum and is particularly interested in its lipopolysaccharide, which is the major structural component found on the surface of this organism. O-polysaccharide is the part of lipopolysaccharide that is most exposed to the surrounding aqueous milieu. It is highly antigenic and is a target for modification by several temperate viruses that infect and lysogenize Salmonella anatum bacteria. The lab uses a variety of genetic and biochemical approaches in its quest to understand both the normal biosynthetic pathway for O-polysaccharide as well as the modifications to that pathway that are introduced by lysogenic viruses. Research

Mike Mooring, Ph.D.
My research in Costa Rica is at the interface of behavioral ecology and conservation biology. With our local collaborators, my students and I are conducting a community based conservation project in a cloud forest ecosystem. We survey jaguars, pumas, and other large mammals using a network of camera traps, and characterize population genetics by collecting felid scat with the assistance of scent detection dogs. Research

Andrew Nosal, Ph.D.
Our group will study the movement ecology of sharks and rays; that is, where, when, why, and how these animals move through their environment. One area of focus is on the relative contribution of social and non-social forces to aggregation behavior in leopard sharks, using aerial drone footage and computer vision to track these animals' movements relative to their nearest neighbors. Another area of focus is on the effect of ectoparasites on leopard sharks' 'roll-flashing' behavior, where they roll to one side, rub their bodies on the substrate, and flash their white bellies skyward. This research involves landside drone surveys, small boat operations, and computer programming using the R and Python languages.

San Diego Zoo Global
The San Diego Zoo and Safari Park have been able to provide many summer research opportunities for PLNU Biology majors interested in the environmental field. The student projects vary each year depending upon zoo needs and funding, but in recent years up to six students have participated each summer. Most research projects involve behavioral observations of primates and other species housed in zoo exhibits; students have also worked as intern keepers in the reptile house, analyzed long-term collection data, and worked with zoo scientists on publications. Research