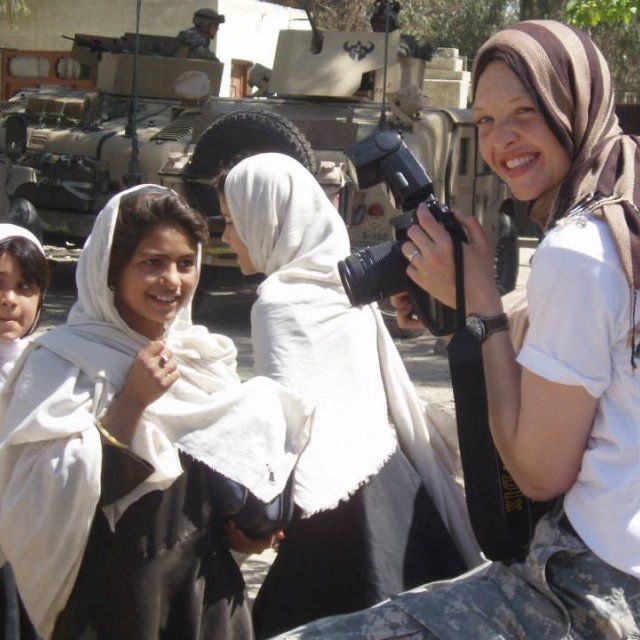 Amber Robinson is a new Point Loma Nazarene University student in her first semester. She transferred from Palomar Community College as a journalism student. She is an Army combat veteran and served ten years as a photojournalist and public affairs leader. She has deployed to Afghanistan in support of Operation Enduring Freedom three times and holds the coveted Bronze Star for professionalism in her occupation. Her profession allowed her to travel all over Afghanistan into the most dangerous areas of the country, to include the famous Korengal Valley, the Pech River Valley and all over Kunar province where the nation’s last few Medal of Honor recipients have earned their medals. She left service in 2013 and moved to San Diego where she returned to college. She co-founded and became Vice President of a small nonprofit in 2014, The American History Theater. Now in its seventh year, she is the Senior Vice President of the organization, through which she seeks to raise awareness about serious veterans issues such as PTSD, transition issues and PTSD from Military Sexual Trauma. She is a contributing writer for the San Diego Veterans Magazine and currently serves on the Advisory Committee for the GI Film Festival San Diego. She also now writes for the PLNU campus paper, The Point. Her passion is helping her fellow veterans through her writing, her nonprofit and by telling her own story of combat and PTSD. She is proud to now be a PLNU student and looks forward to connecting with her fellow PLNU veteran and military-affiliated students. To learn more about San Diego Veterans Magazine, go to sandiegoveteransmagazine.com and to learn more about the annual GI Film Festival go to GIFilmFestivalSD.org.