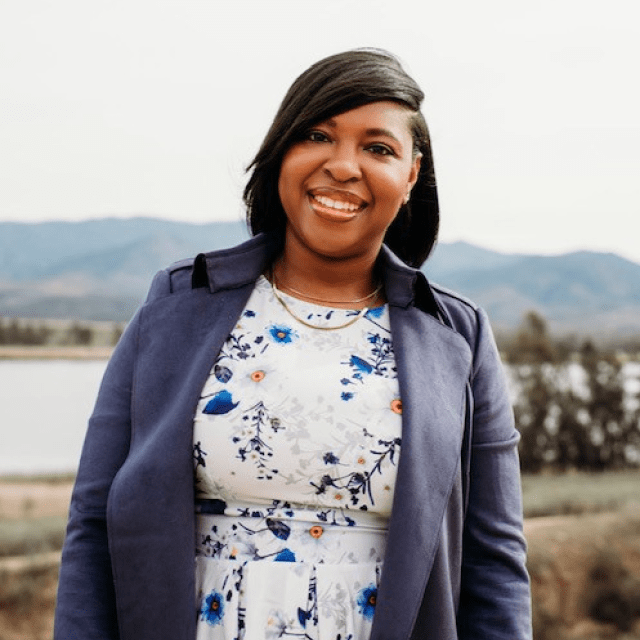 When it comes to developing leadership skills, many people believe imitation is the highest form of flattery. However, Candace Gray, a mechanical engineer who earned her M.A. in Organizational Leadership at PLNU, discovered the key to designing your leadership style is capitalizing on your strengths and making those the blueprint for how you lead.

Gray’s interest in engineering started as an elementary school student in Newport News, Virginia, trying to figure out how she could get her hands on a robot to do her chores.

“I grew up watching The Jetsons, and Rosie the robot was so fascinating to me because you have this robot that can talk and do all your chores. So, I wanted to find out who makes robots.”

Once she discovered engineers design robots, her career path was set.

Gray was always passionate about math and science. She enjoyed taking apart machines and clocks and putting them back together. Her passion for engineering ignited as she attended engineering summer camps and saved her allowance to buy chemistry sets and kits at Radio Shack to play with.

Flash forward to today: Gray works for General Atomics, a company that manufactures parts for everything from energy systems to defense technologies. Being thrust into a manager position is what piqued her interest in the master’s in organizational leadership program at PLNU.

“I was challenged in one of my projects to be a lead where I had to give guidance to technicians who are actually building the part,” Gray said. “I had a goal where I had to reduce the number of hours that it takes to do a particular process … [By] leading a group of people, I got a chance to learn about myself and what works as a leader.”

Not All Managers Are Leaders

The axiom “Not all managers are leaders” is something Gray witnessed first hand at her job. “Bad leadership inspired me because I saw that [the previous managers] weren't motivating their team,” Gray revealed. “Morale was kind of low, [but] I was able to come in and pick up those pieces with the people that I was leading.”

Prior to entering the program, Candace Gray looked up to high-profile leaders. “We see someone who has a commanding presence [like LeBron James or Michelle Obama] … that everyone listens to, and we want to emulate that because we think that's what it takes to be a good leader.”

However, reflecting on her experience in the master’s program, Gray said, “The very first class we took was all about assessing your own leadership style. What I learned is that I can forge my own path.”

People Are A Leader’s Greatest Asset

For Gray, her leadership style centered on connection. “One of the main things that I learned in this program is that building relationships is the foundation of leadership.”

Gray emphasized the importance of getting to know your team, saying, “A lot of times, especially in the type of industry that I'm in, people think it's all about the bottom line. People think that if you have good results, if you're productive, then people are good. But I like to take the opposite approach.”

“One of the main things that I learned in this program is that building relationships is the foundation of leadership.”

“I want to make sure people feel good and to make sure they know that you care about them and you have their best interests at heart … that they’re not just a number.”

Collaboration is also something Candace values immensely as a leader. “I really thrive and I'm motivated by teamwork. I'm a type of leader that wants to get everyone together and have everyone contribute. I think it's really important that the people that you lead know that they have a voice and that they're going to be heard.”

PLNU’s master’s program had an indelible impact on Gray’s life not only because of the academic support, but also the spiritual foundation:

“The thing that really stood out to me about PLNU was not only the support, but having that Christian foundation. That was really helpful and important to me because in undergrad, I didn't have that. It was amazing being at a school where I know people have the same beliefs and similar values to me … and they're on display.”

The instructors would normally have a scripture they would go over in detail, and it would be a time of reflection, according to Gray.

That’s one of the things that I really loved about going to class and doing the hybrid program — getting to know the people in my cohort, and getting to hear how they were able to lead. Everybody brought their own perspective, and we were able to learn from each other.”

During her time in the master’s program for organizational leadership, Gray found herself inspired by the people in her cohort. “Just hearing their stories. That’s one of the things that I really loved about going to class [and] doing the hybrid program — getting to know the people in my cohort, and getting to hear how they were able to lead [within their jobs]. Everybody brought their own perspective, and we were able to learn from each other,” she said.

Gray credits much of her success in the program to the support of instructors such as Bob DeSagun, Ph.D., and Bo Bae, Ph.D.

“Dr. Bo: she's someone that we could go to and talk to if we needed anything. She was just a ball of energy and a very encouraging and motivating person.”

Something that also left a lasting impact on Gray is the downstream effects of leadership as told by DeSagun. “He always emphasized how the things we do as leaders affect everyone else. Have a good attitude as a leader because that's going down to your followers.”

Having professors who provided stellar curriculum as well as showing they cared made all the difference to Gray’s experience in PLNU’s organizational leadership master’s program.

While earning her degree in mechanical engineering at Kettering University, Gray was heavily involved with the National Society of Black Engineers. She now pays it forward as the organization's secretary and by serving as a mentor as well.

“I think that it's really important that girls and people of color see people that we can look up to [in engineering]. I'm really passionate about STEM (science, technology, engineering, and math), and I want to share that with the world. I got inspired as a kid to be interested in engineering. I think there's so many other kids that may be interested in it as well, but maybe they don't know what an engineer does, or they've never seen a female engineer or a Black engineer.”

“I think that it's really important that girls and people of color see people that we can look up to in engineering."

The fact that engineering is a field with little representation for women and the Black community is not lost on Candace. The lack of diversity is something she struggles with at times in the workplace and was part of the reason Candace decided to pursue her master’s in organizational leadership at PLNU.

“It’s been kind of difficult as far as career advancement is concerned, and that's one of the reasons why I wanted to go back to school to get an advanced degree because I have aspirations to get into leadership.”

Although she enjoys her male coworkers, at times Gray longs for the sisterhood that comes from working alongside other females. In previous jobs, she had teams with a larger female presence and greatly enjoyed that.

“When you're in an office and you're the only one, like in my group, I'm the only female. I don't have that sisterhood or anything like that. It can definitely be a lonely path being a female engineer.”

A Degree In Motion

Since graduating, Gray has noticed herself using the skills she learned in her master’s program on a daily basis in the workplace.

“One of the things that we talked about in the program is that people are your most important asset,” says Gray. Sometimes, this notion gets lost in the shuffle of focusing on the task at hand.

“It’s important to set a vision as a leader because leadership is taking people on a journey. You’re trying to get everyone from point A to point B, and as the leader, it’s your job to set the course.”

“I do try to build relationships with people and have good communication. You have to be able to communicate effectively as a leader whether it's through email or direct verbal communication.  There's a lot of misunderstandings when you aren't clear with your communication.”

As a leader at General Atomics, Gray also uses a strategy she learned from her master’s program: vision setting. “It’s important to set a vision as a leader because leadership is taking people on a journey. You’re trying to get everyone from point A to point B, and as the leader, it’s your job to set the course.”

Within her role, Gray likes to give her staff a clear direction and vision for the why behind what they’re doing. The key to leadership is, as Gray coins it, leading from the front.

"As a leader, you have to make sure that people know that they're important to you and to the overall goal that you're trying to accomplish.”

“A lot of times people want to try to push people from behind and that can get difficult,” she said, “because you have some people that are going slow and some that are going fast. You gotta tell them to slow down. But if you, as a leader, are out in front, you set the pace.”

As a lifelong basketball fan, Gray also relates leading her team in the workplace to a team on the court.

“Make sure that everyone knows that they have an important role to play … whether they’re good at defense, at passing the ball, or there's some people on the team who really ride the bench but they're really good at pumping everybody up, cheering on the team. Whatever their role is, it is important. As a leader, you have to make sure that people know that they're important to you and to the overall goal that you're trying to accomplish.”

If you’re interested in earning your Master of Arts in Organizational Leadership at Point Loma Nazarene University, learn more or get the application process started today!