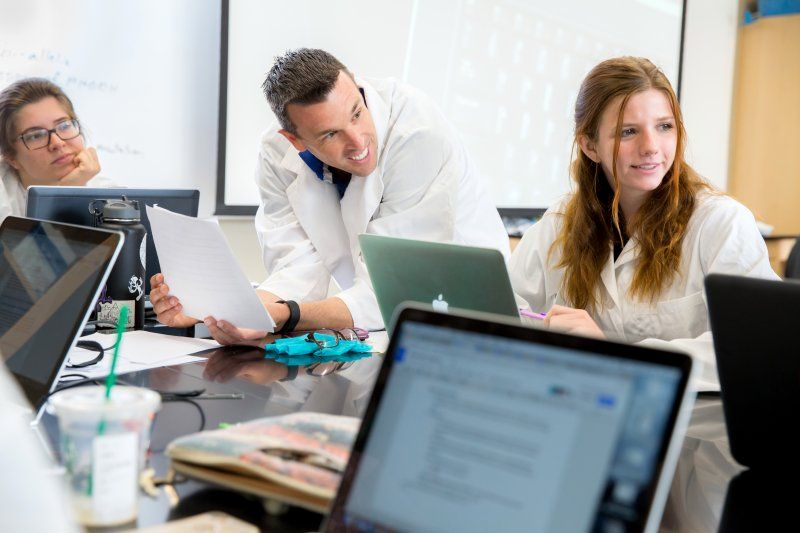 Point Loma Nazarene University is home to a variety of talented and hardworking professors. Not only do they serve as incomparable mentors to students, but they also continue doing important research in their fields. These are four professors in the biology and chemistry departments whose projects stand out as creative, fascinating, and impactful.

Kris Koudelka, Ph.D., aims to create microscopic “cars” out of hard-shell viruses to help medications reach only an intended target—without wreaking havoc on the rest of the body.

Koudelka explains that whenever you take a medicine, that medicine acts on your entire body.

“Any time you take medicine, like acetaminophen for a headache, that’s going to go through your GI tract, into your bloodstream, and have access to absolutely all of your body,” Koudelka said. “It doesn’t need to be in all of these places.

“Taking acetaminophen doesn’t have that many side effects, but things like chemotherapeutics are really damaging because they kill all rapidly dividing cells.”

Put simply, he aims to create a virus to help the drug be more precise in its direction. The goal is to use the shells of these naturally-occurring, non-toxic viruses from plants and bacteria to escort the drug to the proper site.

Koudelka likened the virus to an Uber. The virus “drives” the drug to the lung, for example, to limit access of the drug to sites they don’t want, and keeps it from being metabolized by the body prematurely.

Koudelka explained that one of this project’s biggest strengths is that it doesn’t have to be overly specific: the scope is to make a technology to make a “really good car.” The passenger (the drug inside) is interchangeable, which will make the use of this technology incredibly versatile.

Mike Mooring, Ph.D., has been doing summer research with students since 1998. His expertise includes field biology and conservation/behavioral ecology. He has worked in many field sites, including the San Diego Zoo, New Mexico, Montana, and Nebraska, studying animals like bison and the desert bighorn sheep.

Since 2009, Mooring’s team has worked with mammals in Costa Rica. Mooring explained their key goal was “to empower local conservationists to provide equipment, training, and excitement—encouraging hearts and minds for conservation.”

On their first trip, Mooring and his team brought 10 cameras for camera trap surveys to study the presence, abundance, and behavior of mammals. After the initial first meeting with the local conservationists, they were concerned that their findings wouldn’t be very interesting. All they found were raccoons and rodents—hardly the compelling findings they hoped would be a call to action for interest in conservation.

Then, just before presenting their findings, the students checked the cameras one last time, and found footage of a melanistic jaguar. The PLNU research team, the local administrator of national parks, and local conservationists were thrilled at the discovery; they previously had no idea an animal this large and rare was in the area. This one event helped to fuel interest in the ongoing project, leading them to find more jaguars, ocelots, tapirs, and other fascinating animals.

Their key goal was to empower local conservationists to provide equipment, training, and excitement—encouraging hearts and minds for conservation.

Mooring believes that good science and observation are important goals, but he often sees that big discoveries help get communities involved and “engage in citizen science.”

Katherine Maloney, Ph.D., researches “natural products”— small organic molecules that are produced in nature for a specific purpose, like antibiotics.

She explained that the bacterium-caused citrus greening disease has devastated citrus production in Florida and other areas, especially since citrus fruit takes so long to grow.

Working with collaborators at University of California, Riverside, Maloney began to examine which bacteria and fungi were living inside the citrus trees.

She saw that there were differences between the citrus tree microbiomes that were well-protected against disease and those that were not.

“We hypothesized that maybe the good bacteria and fungi in the [more stable] trees might be producing an antibiotic that prevents the bad bacteria from taking over and making the tree sick.”

Collaborators on the project traveled to Florida to heavily impacted citrus groves, took samples, and began to “isolate as many different strains of fungi and bacteria as they could from both healthy trees and sick trees.” They brought the strains back to California to grow and examine. The collaborators isolated a fungus from healthy grapevines, and a student in Maloney’s lab helped extract and identify the compound.

After receiving a grant from that proof-of-concept, Maloney has been able to continue researching to help combat the spread of citrus dish.

Mike Dorrell, Ph.D., has expertise in developmental and cell biology. At PLNU, his research (partnering with Heidi Woelburn, Ph.D.) is centered more on cancer and chemotherapy.

“The goal is to find ways to treat cancer in ways to minimize the side effects normally associated with chemotherapy,” Dorrell said, “whether that’s finding ways to attack something that’s specific to the cancer, or ways to specifically deliver chemotherapy to the cancer.”

Dorrell and Woelburn aim to create a prodrug, which Dorrell explained was an “inactive” version of the chemotherapy drug, sporting a chemical hat that blocks activity until the hat is cut off.

This drug targets the tumor and uses antibodies to target the tumor antigens. If the enzyme is linked to the antibody, it’s localized to the tumor. The enzyme’s sole job is to cut the prodrug’s hat off at the site of the tumor.

Dorrell feels that no single discovery will “cure” cancer. Rather, we should expect incremental, slow builds in science to work toward treating cancer more effectively.

He also spoke about the student aspect of his and others’ research projects at PLNU.

From what Dorrell has seen, professors are guiding students with subject matter, but the students do have a real sense of autonomy and collaboration with each other.

“At Point Loma, the secondary priority is advancing the research itself, but our number one goal is the mentorship and sending students out with a lot of experience to go and do these wonderful things.”