Learn How PLNU is Providing Thought Leadership in San Diego: TEDx at PLNU 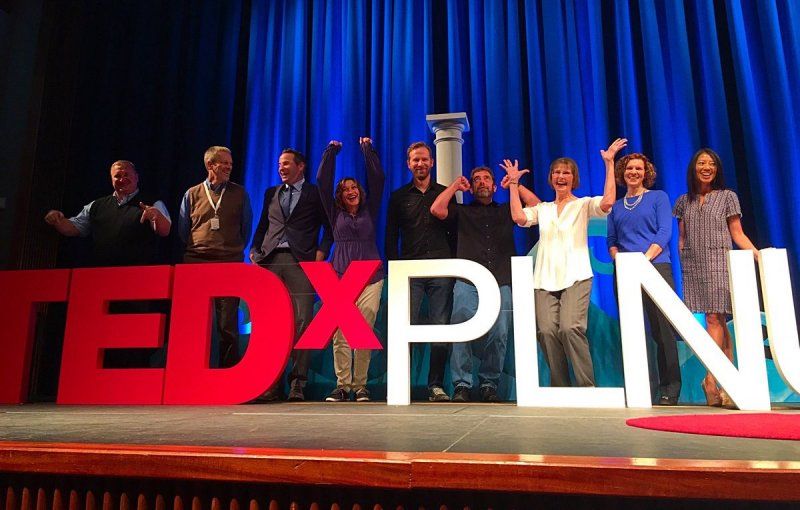 In the spirit of ideas worth spreading, TEDx is a program of local, self-organized events that bring people together to share a TED-like experience. At a TEDx event, speakers combine to spark deep discussion and connection in a small group.

Look Up! Reduce Your Screen Time and Reclaim Your Life

Examine the physical, social and emotional effects of being tethered to our devices and how true belongingness requires us to put our phones down and look up!

About the Speaker: Dr. Melissa Newman joined PLNU’s Communication & Theatre Department in 2015. As a communication scholar, Newman is interested in how people use messages to create meaning, interpersonally and within organizations, and how the social influence of communication affects all aspects of public and private life. For her dissertation, she conducted in-depth interviews with Christian young adults across the U.S. to explore how they used Facebook for religious and/or spiritual purposes and if they perceived any satisfaction from doing so. She has also written on the importance of media literacy as it relates to young adult Instagram use and the messages mothers send their children regarding parasocial relationships with Disney princesses.

The Other “N” Word

With social issues of immigration, homelessness, gun violence, and global warming affecting many around the world, it is dangerous to remain neutral. Because our silence serves no one, it is imperative to take steps to address these issues including standing for what is right.

About the Speaker: Chimara Anyiwo is a 2019 Undergraduate Pre-Law, Business, and Criminal Justice graduate from Point Loma Nazarene University.

From doctor’s offices to detox diets, the word ‘wellness’ has become commonplace, yet its widespread use is riddled with misconceptions and conflicting opinions as to what it truly means. And the most current science validates what many thought leaders have long believed to be true — that cultivating the conditions for positive health and high-level wellness is ultimately an inside job.

About the Speaker: Dr. Jessica Matthews is an innovative educator who has designed and implemented degree and professional certificate programs at several colleges in San Diego, including the Master of Kinesiology in Integrative Wellness program at PLNU. One of the first national board-certified health and wellness coaches (NBC-HWC) in the country, Matthews serves on the research team within the UC San Diego Centers for Integrative Health, leading the design and implementation of behavioral interventions within clinical lifestyle medicine studies. For her superior instructional abilities and positive influence within her local community and the global health and fitness industry, Matthews was honored as the 2017 IDEA Fitness Instructor of the Year.

More Than a Mindset

Explore the impact of a ‘value creation’ approach to business and life and the importance of an entrepreneurial mindset to combat many of the current generational ailments.

About the Speaker: Dr. Randal Schober came to PLNU with over 20 years of experience in for-profit and not-for-profit executive leadership and entrepreneurship. As the former executive director of SurfAid, he provided much-needed humanitarian programs to remote islands in Indonesia. Schober also gained valuable experience while serving as the founder and executive director for HeadNorth, director of education for EFI Sports Medicine (TotalGym), and exercise physiologist at Sharp Memorial Hospital. During his time at PLNU, he has taught undergraduate and graduate courses in entrepreneurship and international business, has been involved in a number of Fermanian School of Business committees, currently serves on PLNU’s Intercollegiate Athletic Committee, and is the lead faculty advisor for the Entrepreneurship Club. In addition to his teaching and committee involvement, Schober is a current board member for several local San Diego nonprofit organizations and has focused his research on innovation and entrepreneurship.

First-generation and low-income youth is a category often used in the educational field to identify high-opportunity students. However, the term is grounded in deficit-based language that immediately informs students about their obstacles and disadvantages. See how we can help shift the narrative by using FLY Scholars as an alternative phrase for identifying resilient students.

About the Speaker: Jonathan Villafuerte personifies a story of courage and resiliency. As a teenager, Mr. Villafuerte fell into street culture and began to cope with his problems by affiliating with a local gang. Fortunately, he transformed his life and earned a full-ride scholarship to Point Loma Nazarene University. In 2009, he became a first-generation college graduate with a bachelor’s degree in psychology. Mr. Villafuerte has since earned a Master of Science degree in Counseling (with a PPS credential) from San Diego State University. Mr. Villafuerte’s work is strongly grounded in equity and empathy for First-Generation, Low-Income Youth (FLY Scholars). As an educated man of color, he is cognizant that with positive and culturally relevant programs, all students have a higher chance of attending and graduating from college. Villafuerte has made a lifelong commitment to bridge the opportunity gap as an educator, public speaker, and urban-education consultant.

What is the potential of Evolution and Christianity being able to co-existence?

About the Speaker: After teaching high school biology from 1990–1999, April Cordero Maskiewicz, Ph.D. returned to college to earn her doctorate in Math and Science Education from the biological and natural sciences departments at UCSD and SDSU, followed by a post-doctoral fellowship at UCSD in the Department of Chemistry and Biochemistry. Now, as a biology professor at Point Loma Nazarene University, April’s research focuses on developing more effective approaches for teaching introductory ecology and evolution that are grounded in the learning sciences literature. April is deeply committed to helping students and the church engage in meaningful conversations that bridge the science and religion divide. She also helps to educate and empower first-generation college students as the Director of PLNU’s University NOW program.

Stories are important for understanding ourselves and the world. How will you tell your story?

About the Speaker: Raised in St. Louis, MO, educated in New England, living in California for many years with her late Oklahoma husband, and frequently visiting France, Hadley Wood considers herself appropriately eclectic and eccentric, if not downright funky. Being at a small Christian liberal arts establishment has not always allowed her to teach her specialization of 16th and 17th century French literature. Instead, she developed language teaching skills (she published a text with Houghton Mifflin) and some familiarity with Children’s Literature, World Drama, Michel Foucault and Literary Criticism. Such a disparate teaching assignment has been unified by an abiding fascination with teaching itself and with determining how to make specific material and skills accessible to as many students as possible.

What weapon do all of us wield that fuels modern slavery, sex-trafficking and other forms of injustice?

About the Speaker: Jamie Gates, M.Div., Ph.D., serves Point Loma Nazarene University as professor of cultural anthropology and as the Director of the university’s Center for Justice and Reconciliation. Having been raised in and studied apartheid South Africa, Jamie continues to focus on justice and reconciliation as a central concern. Working for the sake of human trafficking survivors has become an important part of Jamie’s life. He co-lead the National Institute of Justice research project “Measuring the Extent and Nature of Gang Involvement in Sex Trafficking in the San Diego/Tijuana Border Region” (2013–2016). He co-chairs the Research and Data Committee of the San Diego County Advisory Council on Human Trafficking and CSEC. He directs the San Diego Human Trafficking Research and Data Advisory Roundtable (HT-RADAR). He mentors campus organizers against human trafficking and serves as organizer with numerous national and local organizations.

The Wireless Future of Wellness is Now

How can technology improve wellness in our day-to-day lives and activities?

About the Speaker: Ted Vickey, Ph.Dc., is the Founder & President of FitWell, Inc., a fitness consulting company specializing in innovation and emerging technology. He is also currently completing a Ph.D. in Engineering, focusing on interdisciplinary research within exercise science, technology, and social networking at the National University of Ireland at Galway. He is an emeritus member of the Board of Directors for the American Council on Exercise, the largest non-profit accredited certification organization in the fitness industry. He has also consulted with companies and organizations such as the White House, Department of Commerce, Securities and Exchange Commission, Fruit of the Loom, TSA, Sylvania, and Allied Irish Bank.